Being about 10,000 more diligent than I, Mark Mosher has posted the great photos from the October 30 Miss American Vampire Release party on his site.

Denver's Experimental Music Scene Is Exploding — Here Are 56 Reasons Why

Experimental and avant-garde music has been a significant part of the Denver music world since at least the early 1980s, despite a relative lack of attention in the press and certainly little airplay. Today, this city's experimental music scene is far larger than you might expect.

By Tom Murphy
Victoria Lundy has long been a figure in the avant-garde underground in Denver. She’s been a member of Carbon Dioxide Orchestra and currently plays with the Inactivists and the Jackson Induced Mutant Laboratory, and she and her mathematician husband, Tom, have also been heavily involved in the periodic Concrete Mixer event, which showcases performances of musique concrète. A true composer and an excellent crafter of songs and soundscapes, Lundy has occasionally performed solo with a theremin and synthesizer in recent years. Her new album, Miss American Vampire, is a collection of songs played on the theremin; she’ll celebrate its release with a show at the Walnut Room on Friday, October 30, which will also include the visuals and music of synth wizard Mark Mosher and like-minded electronic artists Keldari Station and Church Fire. Lundy will demonstrate that the theremin can be more than a science-fiction-movie special effect or a quirky musical affectation.

Buy it here on Bandcamp

1 Demon on your chest

3 Maria Callas has been brought back to an unnatural life

5 A bad day at Carlsbad Caverns

All songs written, arranged, performed and recorded by Victoria Lundy except Kojo No Tsuki written by Rentaro Taki

Thanks to Thomas Lundy and Mark Mosher for endless help and encouragement.

“I sung of Chaos and Eternal Night, Taught by the heav’nly Muse to venture down The dark descent, and up to reascend...” —John Milton, Paradise Lost

Miss American Vampire: songs on the theremin by Victoria Lundy The ninety and nine are with dreams, content but the hope of the world made new, is the hundredth man who is grimly bent on making those dreams come true.
—Edgar Allan Poe


The Walnut Room in Denver has been a loyal supporter of experimental and ambient artists, is a beautiful venue with superior sound, and boasts the best audio engineers in town. There, on October 30, Halloween eve, the unveiling of new music by thereminist Victoria Lundy will be the occasion for the gathering of a diverse group of electronic music artists, all of them intent on creating magic. Mark Mosher will contribute his synth wizardry, and to complement the music and sound, Mark will also project enchanting visuals. Church Fire will cast their scorching synth pop into the bubbling cauldron. Keldari Station will bind them all with the music of the spheres. A  cosmic event not to be missed.
Miss American Vampire: songs on the theremin will be released on Bandcamp with a limited number of specially made physical copies available at the show.  The concept of this album is to showcase the theremin — using theremin samples and virtual synths as compositional tools, surrounding more traditional and melodic playing on the instrument. Some of the pieces are more experimental and non traditional; others are more melodic. But the goal is to use the theremin as what it was meant to be: the most expressive electronic instrument ever created.

Mark Mosher from Boulder Colorado composes, improvises and performs techno,  ambient, and experimental music using complex synthesizers.  Mark is also known for his expertise in synthesizer programming,  and production and show control with Ableton Live. For this show, Mark will be performing expressive controllerism on keys, Ableton Push grid, and infrared AudioCubes with his “Invader Cam” interactive visuals with live camera input. Songs will include new material and dark techno tracks from his alien invasion concept albums Reboot, I Hear Your Signals, and Fear Cannot Save Us — with a little dark ambient sprinkled in for good measure. Mark will also be producing projection mapped visuals for the entire show. He has performed at festivals and theaters around the country such as Electro-Music NY, Electro-Music & Mountain Oasis Festivals in Asheville NC, and the Art Institute of Sunnyvale CA. Locally he has produced shows and performed at the Dairy Center for the Arts, DU and CU. In 2014, Mark broke into the top 10 US and top 20 Global ReverbNation charts for the Electronica genre.
Mark is the also the founder of the 200+ member strong Boulder Synthesizer Meetup (www.BoulderSynth.com) and has been blogging on music technology for 10 years at www.ModulateThis.com.
http://www.MarkMosherMusic.com

Victoria Lundy has been playing theremin in the Denver experimental/underground/punk scene since the 90s. She was a member of the avant garde Carbon Dioxide Orchestra, who opened for the legendary Silver Apples in 1997; is a founding member of Denver’s acclaimed nerd rock band The Inactivists and has appeared all of their 6 CDs and EP, and as a guest player live and in recordings with other local artists. She has performed at the 2011 Denver Noise Festival, 2014 Westword Music Showcase with The Inactivists and at the 2013 Denver Post Underground Music Showcase as a guest of ambient project Pythian Whispers. Victoria has appeared at many venues in Denver as well as Boulder’s Dairy Center for the Performing Arts, and DU Lamont School of Music, and demonstrated the theremin at the World Science Fiction Convention, and gave a 2015 Denver.nerdnite.com theremin presentation. For the last year she has participated in the Concrete Mixer musique concrete series, the latest playing with Mark Spybey of Dead Voices on Air, and participated in the 2015 Denver Mini Maker Faire demonstrating the theremin.
http://www.victorialundymusic.com

July 11 was lots of fun with great music from everyone.

I did give the stink eye to the videographer when he got in my antenna zone, and made me flub... 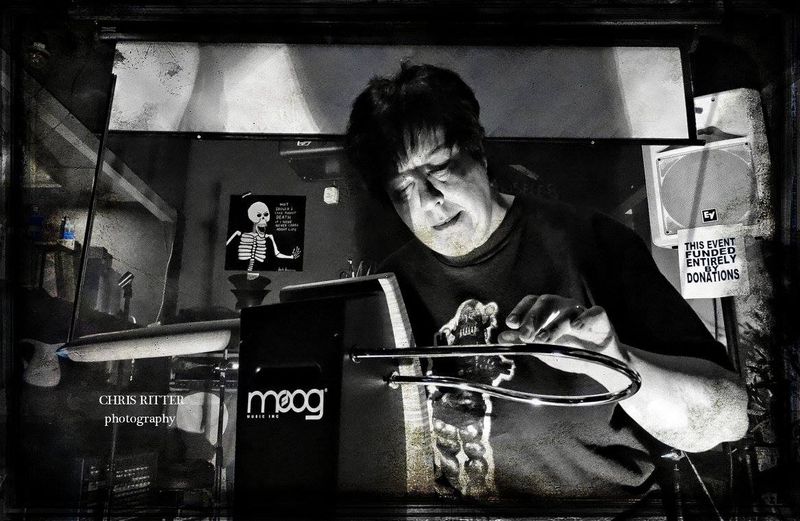 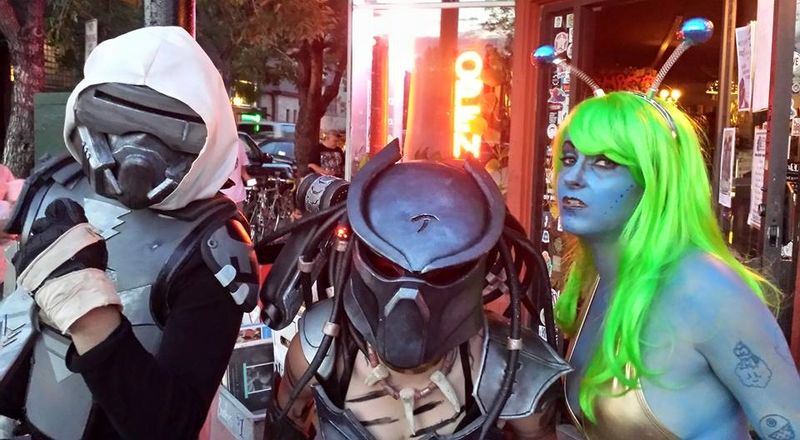 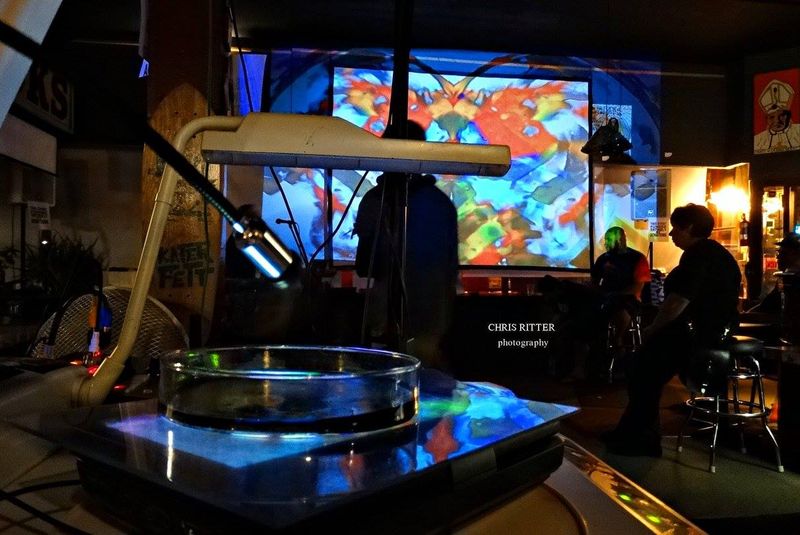 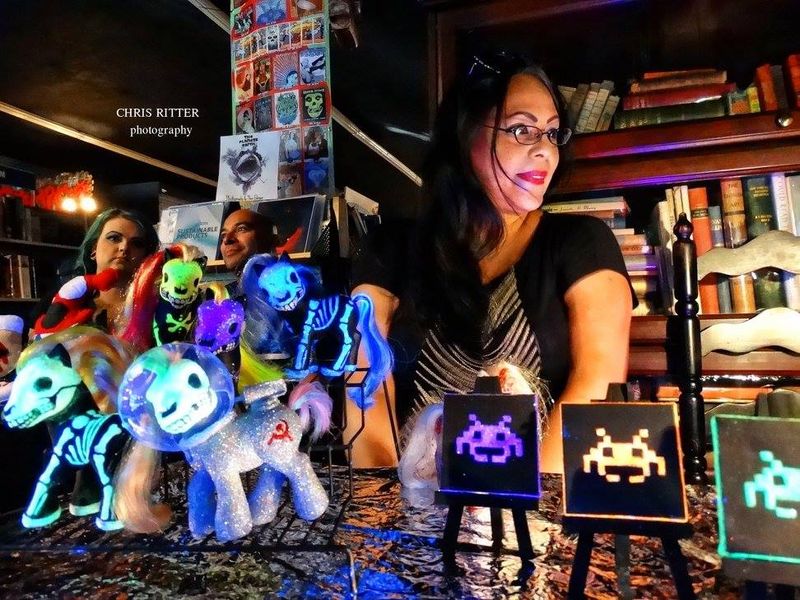 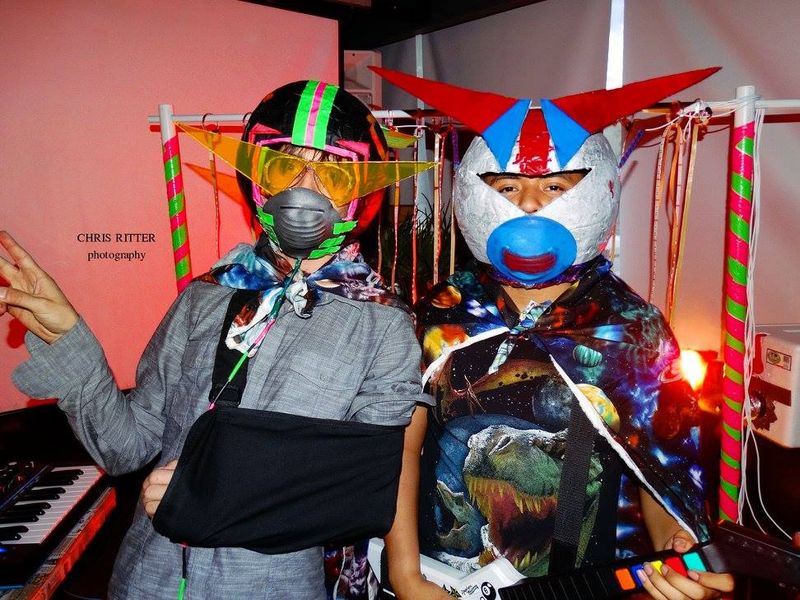 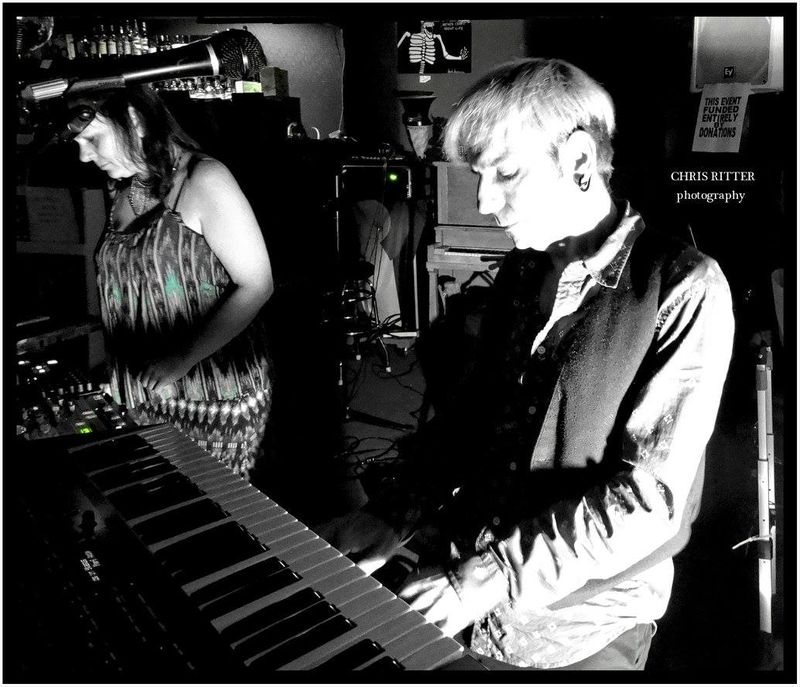