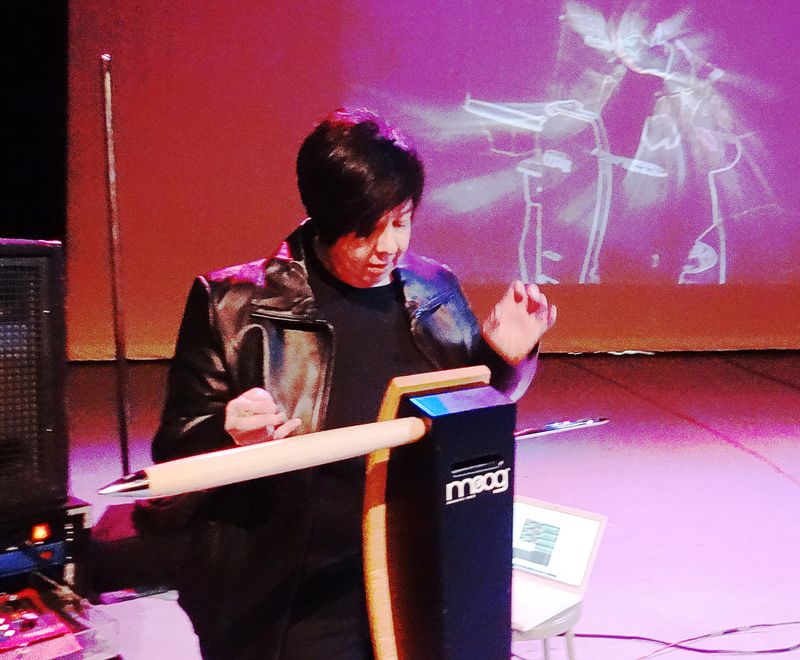 Victoria Lundy has been playing theremin in the Denver experimental/underground scene since the 90s. She was a member of the avant-garde Carbon Dioxide Orchestra, and is a founding member of Denver’s acclaimed nerd rock band, The Inactivists. She has appeared on all The Inactivists’ recordings, and as a guest player live and in recordings with other artists. Most recently, Victoria was a member of The Flux Crew Conduction Ensemble, a twelve-piece chamber ensemble that engaged in real-time collaborative composition. Victoria is currently a member of the Carbon Dioxide Ensemble. This ensemble focuses on the improvisational performance of musique concrète centered around live-sampling of Copper Heart and other objects played with dry ice, with Victoria on theremin.

Victoria, along with Darren Kramer and Mark Mosher, presented the Westword Best Experimental Mix 2014 award-winning “Watt? Amplified and Supercharged Music Expression” at Boulders Dairy Center. She has been featured in the Westword Best Ambient-Music Showcase 2017, Textures Ambient Showcase, and she was honored as one of Denver’s Top 100 Creatives 3.0.

Victoria has performed at the Denver Noise Festival, the Titwrench Music Festival, the Westword Music Showcase (with the Inactivists), and the Denver Post Underground Music Showcase as a guest of the ambient project Pythian Whispers. She appeared at the DU Lamont School of Music in a special convocation edition of the Concrete Mixer musique concrète series. Victoria has presented and demonstrated the theremin at the World Science Fiction Convention, the Lamont School of Music, Nerd Night and the Denver Mini Maker Faire as well as the Rocky Mountain Synthesizer Meetup and Colorado Modular Synth Fest.

Victoria released a solo recording, Miss American Vampire on Halloween 2015. Currently, she’s concentrating on solo ambient work exploring the expressive qualities of the theremin and plans to release an album celebrating the centenary of the theremin in 2020.