Home Shows and Projects Music About Contact
Syn Sunday Set Recording from April 2017
New Track: On the Cusp of Reanimating The Corpse 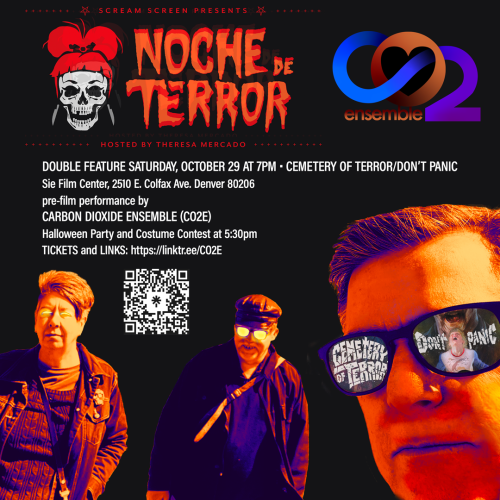 About the CO2 Ensemble

CO2 Ensemble, a collaboration with Thomas Lundy, Victoria Lundy, and Mark Mosher, is an improvisational musique concrète ensemble performing with copper heart and dry ice, theremin, and live sampling with interactive visuals. In this unique music and multimedia act, Mark uses the Elektron Octatrack dynamic performance sampler and other electronics to live-sample Thomas Lundy as he manipulates a Copper Heart with dry ice and other objects. Victoria Lundy accompanies on theremin and live electronics. The only audio source for Octatrack besides drum samples is the input from the contact mic on the Copper Heart. Mark also provides interactive visuals with live camera input to enhance the experience.

Since 2014, CO2 Ensemble has performed multimedia concerts in and around Denver. We played the long-running Concréte Mixer concert series at the Walnut Room, were the opening act for day 2 of the Denver International Noise Fest, collaborated using graphical scores with the filmmaker Taylor Dunne, and were invited to play a music convocation for the Lamont School of Music at the University of Denver performing on stage at the Gates Concert Hall.

About Scream Screen
Scream Screen - an ongoing series of films hosted and curated by Theresa Mercado - presents a terrifying trip to Mexico to spotlight two of Mexican gore-master Rubén Galindo Jr.’s most remarkable entries to the horror canon: CEMETERY OF TERROR and DON’T PANIC!

Cemetery Of Terror: The directing debut of Rubén Galindo Jr. (DON’T PANIC, GRAVE ROBBERS), CEMETERY OF TERROR is easily the wildest zombie movie to ever emerge from Mexico! On Halloween night, a group of bored teenagers steal a corpse from the morgue and take it to a nearby cemetery. Once there, they perform a Satanic ritual in an attempt to bring it back to life. Unfortunately, the kids chose the body of a savage serial killer who had just been shot dead by police. Whoops! The group of fun-seeking youngsters unwittingly revive the undead sadist, and only occult expert Dr. Carden (legendary Mexican character actor Hugo Stiglitz) can end the madness! Filled with gratuitous gore effects that would feel right at home in a Fulci film, CEMETERY is non-stop thrills and bloodshed from beginning to end.

Don’t Panic: A bonkers tribute to A NIGHTMARE ON ELM STREET from Mexican horror king Rubén Galindo Jr. (CEMETERY OF TERROR, GRAVE ROBBERS), DON’T PANIC is a surreal and action-packed rager that’s guaranteed to leave audiences awestruck and dumbfounded. It’s Michael’s (Jon Michael Bischof, who also performs the film’s memorable theme song) seventeenth birthday. His friends have decided to surprise him with the ultimate gift: breaking into his house and playing with a Ouija board! But this harmless fun quickly transforms into a supernatural terror, as newly-summoned demon Virgil possesses and murders Michael’s friends! Defying reality at every turn, DON’T PANIC is an awe-inspiring 1980s horror classic, now newly restored from the original 35mm camera negative.

Theremin-centered electronic music in Denver, Colorado. I play as a solo artist as well as the Carbon Dioxide Ensemble. I'm also a member of acclaimed nerd rock band The Inactivists.