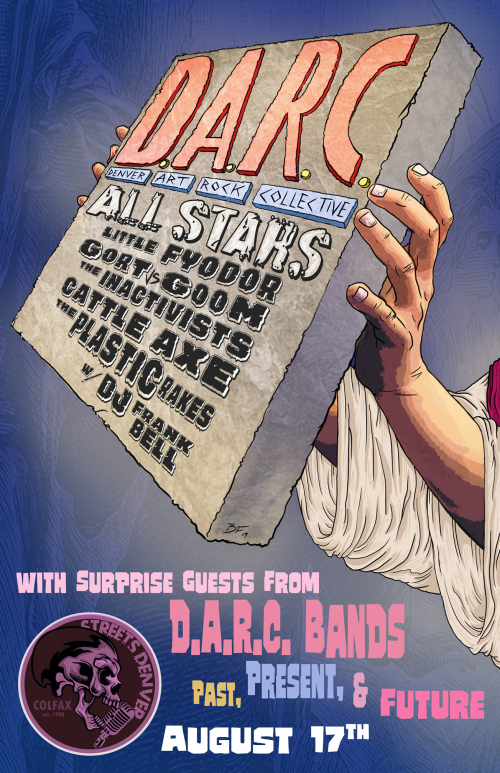 When the Denver Art Rock Collective was established in 2005, it was designed to help misfit musicians band together in support and celebration of the different, the original, and the weird. Outnumbered in a disinterested rock music scene, the DARC sought refuge in the strange.
Since those halcyon days, the DARC has seen guitar sales decline, CD sales decline, even MP3 sales decline. Clubs have all but abandoned material support for the musically wayward. While the DARC set itself apart from the mainstream, the mainstream has dried up or moved away entirely. Once the court jester to a larger kingdom, the DARC is now one of the few survivors. There is no need to point out the feet of clay, as the once indomitable genre has now withered to dust. Much like Vaughn Meader in the wake of the JFK assassination, the DARC is adrift, a rebel without a cause. Over the past 14 years, many of the bands have disbanded and rebranded before shuffling off to the great gig in the sky. Newer bands, like Bolonium and Gort vs. Goom have taken their place, fighting to keep the spirits alive.
On Saturday, August 17th, 2019 at Streets Denver, in what will either be a reunion of old or a celebration of continuation, the DARC will be hosting their All-Star event. (Hey now, you’re an art-rock star!) Expect to see active DARC bands, The Plastic Rakes, Gort v. Goom, and the Cattle Axe as well as host/MC DJ Frank Bell. And all-star members of such seminal bands as The Mourning Sickness, New Ancient Astronauts, Yerkish, the Skivvies, Amphibious Jones, and the Inactivists. Maybe we’ll even coax Little Fyodor and/or Babushka out of quasi-retirement. These are artists that have not been forgotten… mostly because people weren’t aware of them in the first place. But the few who did see them (mostly because they were dating one or more of the band members at the time) will never forget them. Maybe not in a good way, but the DARC will not go gentle into that dark night. Art Rock may smell funny, but it’s alive!